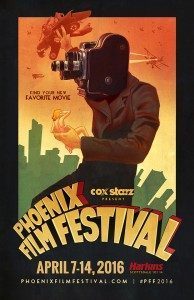 Following the screening will be a Q&A with:
James Sadwith  Writer, Director, Producer

The Phoenix Film Foundation is proud to announce the 16th Annual Phoenix Film Festival taking place April 7 – 14, 2016. The best way to keep up on the festival is right here on our website, joining our mailing list and to “Like” us on Facebook.

The Phoenix Film Festival annually screens over 150 films, holds amazing parties and provides filmmaking seminars to capacity audiences. Over 25,000 attendees enjoy the 8 day festival. The Festival takes place all in one convenient location and is held on 7 screens at the Harkins Scottsdale/101. All parties and workshops are held right on site so you don’t miss a thing.

We hope to see you there!