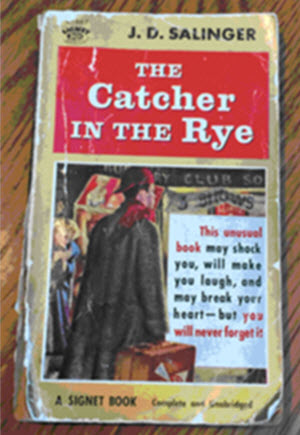 Alex Wolff has a special affinity for The Catcher in the Rye.  Yes, the book spoke deeply to him, and like many teenagers he identified with many of the issues that Holden Caulfield was grappling with like alienation and disillusionment. But Alex came upon the book in an entirely original fashion. In the late 1950’s his grandfather had read The Catcher in the Rye and was so moved by it he always remembered it. When his son, Michael (Alex’s dad), was fifteen in 1967 Alex’s granddad took The Catcher in the Rye off the shelf, signed it and gave it to Michael.  Michael read it and was equally taken with the book. Michael put the book on the shelf waiting for the day when he could pass it down to his own son.

When Michael’s first son, Nat Wolff, turned 13 The Catcher in the Rye came off the shelf again. Michael signed it and handed it to Nat. And after Nat read it he signed it and waited until Alex was 13 before turning the book over to him. Alex has now signed it, and when his own son turns 13 he too will be handed down the family heirloom – the three generation-autographed copy of The Catcher in the Rye.

Alex’s first audition for the role of Jamie was recorded digitally and sent to Jim Sadwith, the writer/producer/director of the project. Jim and his team were immediately taken with Alex’s audition. Jim flew out from LA to NY and auditioned Alex in person. When Alex walked into the audition room he was carrying the copy of The Catcher in the Rye that three generations of the Wolff family had treasured and autographed. Jim was impressed. Then Alex knocked his audition out of the park and the rest is history.

Read about how Jim Sadwith (Writer/Director/Producer) was inspired by The Catcher in the Rye.