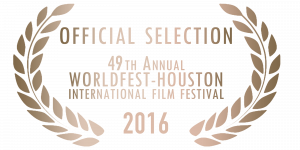 COMING THROUGH THE RYE will be screened :

For more on the screening at the  Houston Worldfest Film Festival click on this link.

WorldFest-Houston International Film Festival (now it’s 49th year!) is one of the oldest and largest film & video competitions in the world, with more than 4,500 category entries received from 37 countries in 2006. Actually WorldFest is 12 Major film & video competitions in one event, unlike Cannes, Sundance and Toronto, which are just 2 competitions for shorts and features only. Because of our 12 major competitions and the 200+ sub-categories, WorldFest does give a lot of awards, but they are both earned and deserved. No awards are given in any category unless the scores from the juries are high enough to place for honors. Overall only 15-20% of the total category entries actually win an award at WorldFest. However, everyone attending the Grand Awards Gala wins an award, as we only invite the actual winners, which makes for a delightful and enjoyable evening, since there are no disappointed “nominees” that do not win anything. Those that do not win an award are informed by email or letters prior to the festival.

WorldFest Artistic and Program Director Kathleen Haney stated, “We feel that it is impossible to properly emphasize individual films when the festival screening schedule is too large. We must consider both our festival audience and our independent filmmakers. A huge slate of 150-300 films cannot possibly do justice to each individual film. Further, it is impossible to see more than 50-60 films (with four shows a day) in a ten-day festival, so it is foolish to program more than that.” Haney continued, “We will concentrate on only the very best, selecting new American & Foreign Independent films that truly deserve a premiere at WorldFest. By doing so, we can concentrate on the films and their filmmakers and enable our faithful audience the opportunity to see each and every film!” All 35mm films and Digital entries are screened at the AMC Meyer Park Theatre, WorldFest – the Indie Film Festival for the New Millennium!

In addition to honoring a different country each year, WorldFest will continue with its annual Short Film Showcase, a special review of 100+ new short and student films…from the festival that discovered Steven Spielberg, George Lucas, Ang Lee, John Lee Hancock, Randall Kleiser, Ridley Scott, Robert Rodriguez, Robert Townsend, The Coen Brothers, Spike Lee, Oliver Stone and David Lynch with their very first awards. WorldFest has emerged as the oldest film festival management in the world, with the same continuous director for 39 consecutive years. A few other festivals are older, but they have had as many as ten different directors. WorldFest is uniquely the only film festival in North America that is staffed and managed totally by filmmakers. All staff members have active film and video production experience, which gives them a very unique point of reference in relation to the entering filmmakers and their work. WorldFest, founded in 1961, is the oldest Independent film festival in the world, and the 3rd oldest film festival in North America.

By having a small, highly selective schedule of new Indie Short & Feature films, the festival can help the film gain reviews and a distributor, rather than merely act as a preview platform for an upcoming release from a large US distributor. Most of the so-called ‘Independent Films’ featured at Sundance are quite frequently fairly large-budget films produced by special “Indie” divisions of the major studios. In fact, the majority of films featured at Sundance and other “Indie” Festivals actually already have their distribution in place. The 120-page WorldFest program book is distributed free of charge to the public, all attending filmmakers, all studios and every major film festival in the world and to every known major film & video distributor in the world. The WorldFest program book has become an invaluable reference document for film acquisition and review.