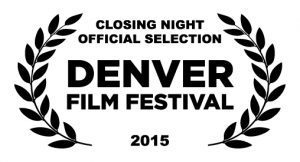 COMING THROUGH THE RYE has been chosen as the Closing Night Film. Alex Wolff to receive the festival’s Rising Star Award.

Since 1978, the Denver Film Society (DFS) has worked to promote the film medium as both an art form and a civic forum, developing a program that includes year-round screenings, community outreach projects and renowned special events. It is in fact the only nonprofit organization in Colorado dedicated to engaging both its members and the general public in a lifelong, life-altering relationship with and understanding of film and film culture.

The twin pillars it has built on the foundation of this vision are the award-winning Denver Film Festival, now in its third decade, and the Sie Film Center.

On Saturday, November 14th at 8:00 PM in the Ellie Caulkins Opera House there will be a screening of Coming Through the Rye. This film was written, directed, and co-produced by James Sadwith, this smart, semiautobiographical coming-of-age story set in 1969 against a pastoral landscape features winning performances by its two up-and-coming leads, Alex Wolff and Stefania Owen.

Click here to visit the page about Coming Through the Rye as presented on the Denver Film Festival (2015) website.